I was in Calgary yesterday in the core lab, meeting with some folks about Strata's oil project. The core lab is a big warehouse where thousands of meters of drill-core is stored, from Strata's wells and also many other Alberta oil companies.

I thought you might like to see some pictures I took of the core. Many of you have seen images of our drill-core before, but this time the pictures I'm showing you are specifically of our Bluesky-Gething core which is the sands-portion of our deposit which sits above the carbonates. Take a look at these beautiful samples: 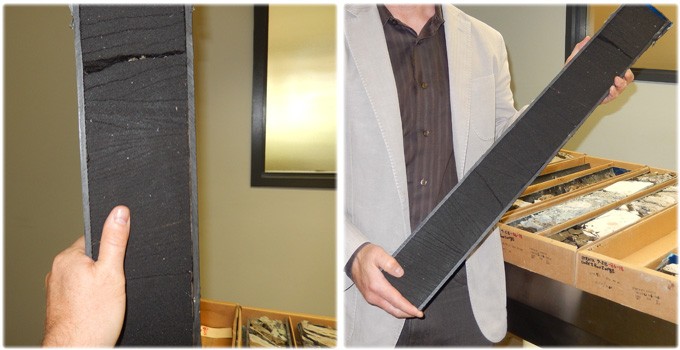 These are images of Strata Oil's drill-core from its Bluesky-Gething sands.

We're in the process right now of determining whether any of the extra-heavy oil in our sands can flow unassisted. This is known as cold-production of heavy oil, and several other companies in the Peace River region have had good success with it, especially Baytex Energy. Our technical team is working on some recommendations and we should hear from them later this month.

The room where I was viewing the core absolutely reeked like bitumen. If you've ever been around a paving-crew when they're spreading asphalt, you know the smell. I love it, but that's probably because I know it's worth money. It'll make you dizzy after awhile. Here are some pictures I took of the carbonate-portion of the core:

Here are more images of core from our Debolt carbonates.

Notice how the extra-heavy oil is oozing from the pores in the rock. When the drill crews were making their notes, they remarked about the unusually high amount of oil coming out. Also notice how relatively fine the rock appears, yet the permeability of our carbonate deposit is excellent. The interconnectedness amongst the spaces within the rock itself is very high, according to our technical experts, which makes production recovery levels potentially much higher. Also of interest is the fact that this carbonate "rock" is actually very crumbly, as you might expect sedimentary carbonate rock to be.

On another note, the Oil and Gas Journal just published an article which goes into some detail on Alberta's carbonate-bitumen deposits. The article is a bit technical but I thought you might like it.